The next game for our Retrospective on the Crash series is another kart racer, taking a lot of inspiration and design ideas from Naughty Dog’s hit racer, Crash Team Racing. Will Vicarious Visions do the gameplay style justice or does it have a few issues? 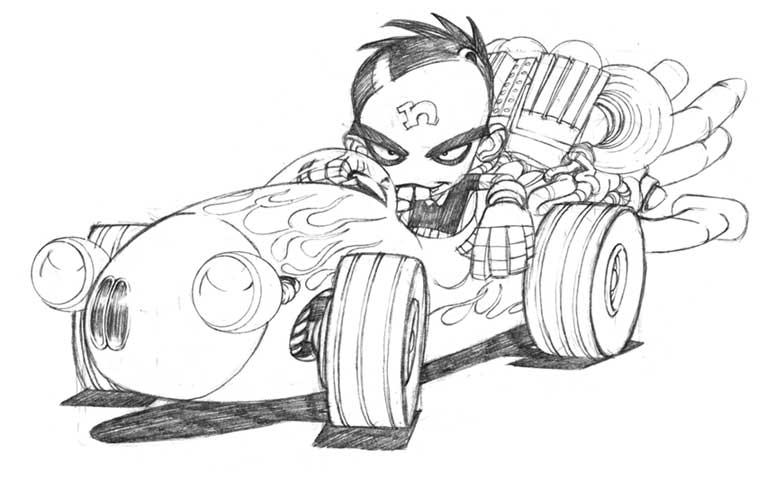 The main gameplay element they worked hard to nail was being a faithful successor to CTR, so they had a full-on adventure like the original CTR and characters originally not unlockable in CTR like Oxide were unlockable this time around. The game finally released on the Nintendo GameCube, PlayStation 2, Xbox and PC in 2003 with a GBA port that was a different game altogether. They all got solid review scores, with many calling it an updated version of CTR. 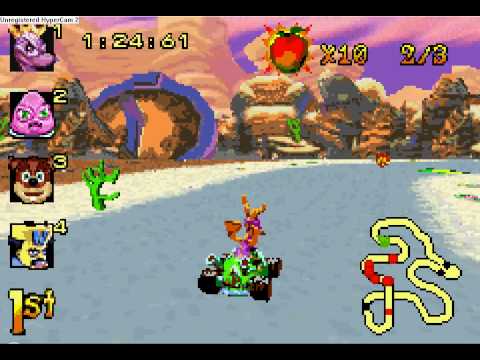 The studio was also very true to the Crash-style, with many elements from their GBA Crash games being pulled from Naughty Dog’s PS1 Classics and they even got the original character designer Charles Zembillas to work on the character designs while the environments were designed by Joe Pearson, John Nevarez, Alan Simmons and Di Davies. This allowed the team to make the game feel faithful to the original trilogy and having the same style past games had.

They also tried to really push the technology of the at the time latest platforms, so they hired studio Red Eye Studio to make a number of FMV cut-scenes for the game. Other information about this portion of development includes the following from the Wikipedia Entree on Crash Nitro Kart.

“….Artists set certain rules for how each character would carry itself by default. As animator Thomas Happ noted, “N. Gin, for example, would always default to twitchy, side-to-side glances, while Tiny would often scratch his head in confusion. There were a lot of scenes where the characters are just standing around listening to Emperor Velo talk, and we had to invent ways to personalize their mannerisms and create a uniquely ‘thinking character’.” To achieve the bold and deeply saturated colors and textures for the characters and environments, the artists used Maya as well as Adobe Photoshop and Corel Painter. While the artists adapted many of the sets and props in the cinematics from in-game counterparts, they recreated the majority of these objects from scratch in order to add surrealism to the scenery. The cinematics were completed well in advance of the four-month deadline.”

Crash and friends relax at home during the opening of the game, with Crunch and Aku Aku talking about dieting while Crash is just sleeping the day away. Cortex is planning evil plans with N. Gin and Tiny talking about what they should do next to stop Crash. While all this is going on, both good and evil is warped into space.

Both groups wake up in a new galaxy owned by Emperor Velo XXVII, who plans on having the teams race for the entertainment of his subjects. He promises the Earthlings that winning the races will win their freedom, but threatens them with the destruction of Earth if they refuse to race. So not unlike Crash Team Racing’s story, Crash and friends agree to race for the Emperor and they travel across the different galaxy’s he owns for some fun racing action.

It is also worth noting that while we have two teams for the adventure mode, we also have another set of teams. The Yellow Carts are driven by Oxide from CTR, with his team being composed of minions Zam and Zem. But we have the Green Cart team, being lead by N. Trance and his team has hypothesized versions Dingodile, Polar and Pura (who was replaced with Spyro in the GBA version of CNK).

With the FMV cut-scenes and a large cast of racers, the plot is a bit more in-depth compared to CTR overall.

Not unlike the Crash Wrath of Cortex Retrospective, I could copy and paste all of the gameplay portions of another Crash game, Team Racing. I say that as this game is very close to the core of that title.

The gameplay modes include Adventure (which is exactly like it was in CTR), Race Time Trial, Lap Time Trial, Quick Race, Team Race and Cup Tournament. The adventure mode should be noted, as it has a lot of content like in CTR. You five worlds to race through and the end goal is to complete three races to unlock a boss key. After getting this boss key, you can move on to the next world. Each level has different missions to complete and they closely mirror CTR. Time Trails which have you bash into creates to freeze the clock, CNK tokens to collect during the race and even some Crystal Collecting missions to complete.

Boss races return like in CTR and they function the same too. But the major difference in gameplay is the track designs and the brand new gravity mechanics.

Crash and friends have special karts that when on specific surfaces, they turn into hover crafts and can ride on the side of walls or on ceilings. This allows for very creative levels that have you going all over the place.

What makes this even better is the return of the great drifting system, where if you press one of the triggers before you hit the red point, you can get a turbo boost. You can do this up to three times and you also have the ability to hop off large gaps to get a bigger boost.

The big issue with CNK and it really is a minor one is that the item balance isn’t as good compared to CTR. Items like teleporters and lighting balls are more common, leading to some races not feeling super fair. However, thanks to the tight gameplay and the ability to use things like Nitro and TNT crates to ward off attacks in addition to a great shield power-up, it makes races fun regardless of the off item balance.

Another thing worth noting is that like in CTR, collecting 10 Wampa Fruit increases the power of the items you have. So turbo boosts last longer, items like missiles are more powerful and the like. Overall, it is a great successor to CTR in the gameplay front.

Presentation wise, the game is very close to the original Naughty Dog titles. Having the original artists back on board is the reason for this and it allows for the designs to stand out and be striking. And this reflects the game’s world and setting too; every location in the game could be ripped right out of Crash 2 or 3 despite Crash and friends being in space now.

Musically, it sounds good with a number of tracks sounding close to the older Crash titles and being faithful to the series. Having one of the tracks during the opening FMV cut-scene being a remix of the Crash 3 theme was really nice too.

Crash Nitro Kart is a game that is very similar to Wrath of Cortex; copying a template that Naughty Dog used and working hard to maintain the polish and care the studio had when making those games for this new project. The result is a game that is a strong successor to CTR and is a fantastic kart racer.

Special mention goes out to the GBA version of the game, as not only does it contain many of the features and content from the console title but also still having many of the same core mechanics as the console versions.

The console and handheld version of Nitro Kart are great racers and I encourage you all to give them a shot if you want some fun kart racing action!

Former writer from 3WIREL, Crashy News and Press Start AU. All around friendly guy, love to write and have a knack for talking at length about video games. View all posts by RK128